Chartered in 1799 “…to cultivate every art and science which may tend to advance the interest and happiness of a free and virtuous people…” The Connecticut Academy of the Arts and Sciences is the third-oldest learned society in the United States.
As part of its mission to disseminate scholarly information, in 1810 the Academy commenced publications on all aspects of the sciences, arts, and humanities. It has three series: Memoirs are monographs or booklength publications; Transactions are essays in history, economics, mathematics, archeology, languages, literature, and the natural sciences, and most recently, articles of an interdisciplinary nature.
The third series, A Manual of the Writings in Middle English, is the definitive reference source in this field. First published in 1916, a modern and expanded version commenced in 1967 and is now in its ninth volume. 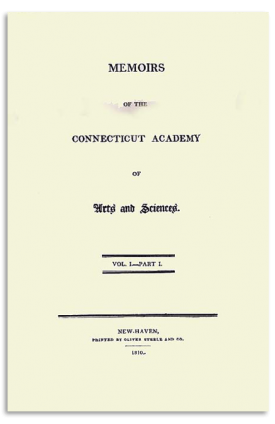 From the Academy’s first publication, Memoirs of the Connecticut Academy of Arts and Sciences, Vol. I–Part I.:
Vision of The Founding Members
[Excerpt:] “The design of forming a Society, which might combine the efforts of literary men in Connecticut, for the promotion of useful knowledge, was suggested early in the year 1799. A few gentlemen in New-Haven attended a meeting at an invitation given; and a sketch of the principal objects of such an Association was communicated, together with the outline of the proposed Society, which was named “The Connecticut Academy of Arts and Sciences…”
The Academy’s Act of Incorporation
[Excerpt:] “WHEREAS literary Societies have been found to promote, diffuse and preserve the knowledge of thos Arts and Sciences, which are the support of Agriculture, Manufactures and Commerce, and to advance the diginity, virtue and happiness of a people…”
A List of the First Members
Minutes from Meetings

To apply for membership or to submit work for consideration by the Publications Committee, please contact caas.membership@yale.edu.