Minutes of CAAS Meeting 1457:  April 17, 2017–Meeting No. 1457. “The Wehrmacht Past, the Bundeswehr, and the Politics of Remembrance in Contemporary Germany.” Presented by Erik Grimmer-Solem, Associate Professor, College of Social Studies, Wesleyan University.

President Tignor introduced two new CAAS members:  Patricia Comitini from Quinnipiac and Daniel Rabin from the France Foundation.  He then asked the incoming CAAS wine Steward, Steven White, to present a CAAS plaque of thanks to the outgoing wine steward, Manfred Noack.

President Tignor then turned the meeting over to Jennifer Tucker, the Vice President from Wesleyan who introduced the speaker from Wesleyan.

Erik Grimmer-Solem is an Associate Professor of History.  He also is associate professor of German studies and a tutor in the College of Social Sciences. His expertise is in modern German history with specializations in economic history, the history of economic thought, and the history of social reform. He has also developed research interests in German imperialism, German-Japanese relations before 1918, and Germany in the two world wars.

He began his talk with a bit of family history dating back to the 1940’s especially at related to the European resistance. 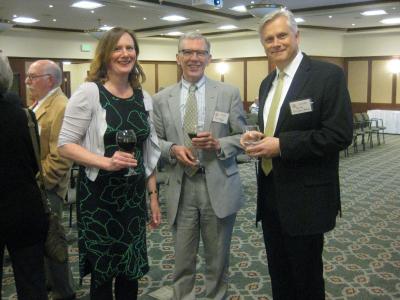 Grimmer-Solem discussed his research that uncovered the involvement of a Wehrmacht general, honored in public as a member of the military resistance to Hitler, but also involved in massive war crimes and crimes against humanity. He discussed how his findings were received by the German public, how that resulted in the official renaming of an air force base, and what that reveals about German perceptions of the war of destruction waged in the Soviet Union by the German army. The talk explored the deep involvement of the Wehrmacht in the Holocaust, the Janus-faced nature of many members of the German military resistance, and the ongoing problem of basing contemporary Germany’s military tradition and “official memory” on aspects of this tainted legacy.

There was ample discussion regarding present day memory in Germany.

President Tignor concluded the formal meeting by suggesting that the issues raised in this talk regarding past monuments are relevant to issues in present day America.