Growing a School: A Battle for Excellence 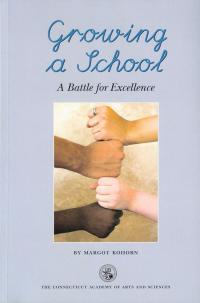 Growing a School: A Battle for Excellence
Photo by Douglas Nygren
Author: Margot Kohorn,
Research Affiliate Child Study Center
Yale University
Growing a School is a 25-year historical account of the development of the Follow Through Program, a school reform project started in 1968 in New Haven CT. It is the story of how a progressive philosophy, a traditionally trained leader, and a wide range of student needs combined to be- come something entirely new and effective for New Haven school students.

“Margot Kohorn’s 25-year historical account of Growing a School: A Battle for Excellence, documents all the details of the development of a teacher, parent and child empowered environment starting in 1968 in New Haven, Conn., at the time when lower income schools, families and their communities were struggling for survival. This project’s leadership included the wisdom of Dr. Albert Solnit, chairman of the Yale Child Study Center, the miraculous chemistry of the wise, dynamic and visionary leadership of the Principal, Audrey Tiani, the charismatic and forceful parent, Maceo Patton, and the sensitivity and brilliance of Margot Kohorn, the newly appointed psychologist who was the weaver and supporter of ideas in the Follow Through Program. Credit and support of this innovative project also goes to the methodology and philosophy of the Bank Street model and the Head Start Program developed by Drs. Edward Zigler and Julius Richmond.
This is a most exciting book and the project predates the success of charter schools, for example, the Harlem Children’s Zone in New York and the Amistad Academy in New Haven.” — Dr. Phyllis M. Cohen Yale University Child Study Center
“As a parent for over 10 years at what eventually became West Hills Follow Through, it is encouraging to know that its history will not be forgotten. Margot Kohorn’s Growing A School charts the work of a group of dedicated educators that formed a community where learning and joy happened on a daily basis. This story of how a progressive philosophy, a traditionally trained leader, and a wide range of student needs combined to become something entirely new and effective for New Haven students is important reading for anyone who continues to press for school improvement.” — Jonathan Gillette, Director of Teacher Preparation and Education Studies Program, Yale University Lecturer, Yale Child Study Center
Vol. 62 of the Transactions of The Connecticut Academy of Arts and Sciences.
(2010) ISBN 978-1-878508-30-0 119 pages $20.00 paper
© 2009 by the Connecticut Academy of Arts and Sciences
Published by the Connecticut Academy of Arts and Sciences,
P.O. Box 208211, New Haven, Connecticut 06520-8211.