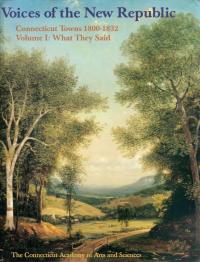 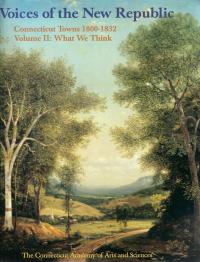 Voices of the New Republic: Connecticut Towns 1800-1832
Volume I: What They Said
Volume II: What We Think
CHRISTOPHER P. BICKFORD and HOWARD R. LAMAR, Editors
CAROLYN C. COOPER and SANDRA L. RUX, Associate Editors
A two-volume source book for Connecticut history in the early years of the new republic, a period relatively neglected by historians, these volumes contain fresh and vivid material, and brings Connecticut’s past alive.
WINNER OF THREE AWARDS
• Homer D. Babbage, Jr. Award for Connecticut History from the Association for the Study of Connecticut History
• Bookbinders’ Guild of New York 2004 Design Award for Scholarly/Reference Book Series
• 2004 Connecticut Book Award from the Connecticut Center for the Book, an affiliate of the Center for the Book in the Library of Congress
Volume I: What They Said presents a set of original reports about Connecticut towns written between 1800 and 1832 in answer to survey questions that the Connecticut Academy of Arts and Sciences, newly chartered in 1799, sent out to the 107 towns in 1800. They asked about each town’s history since its founding, its plants, animals and fishes, geology, rivers, weather, farming methods and farm products, industries, diseases, churches, schools, libraries, taverns and breweries, ships, roads, bridges, Indians, free blacks, poor relief, emigration, crimes, amusements and vices–and curiously enough, “the time when pleasure carriages were first used.”
The voices that replied vary in tone: exuberant, boastful, matter-of-fact, dismissive, mournful, nostalgic, fearful, meticulous, humorous, complaining, thoughtful, censorious, pious, didactic, eager, self-confident, reverential. The stories they tell reveal the conditions in which these newly self-governing citizens lived, and the methods they used for improvement of conditions. For the first time, all their “statistical accounts” are gathered together and published here, so we can read What They Said in a single volume.
Volume II: What We Think contains essays by modern historians and scientists interpreting what those documents say about particular characteristics of the towns in that period of economic, political, religious, and social transition.
The essays offer commentary and assessment of the town reports on various topics the Connecticut Academy queried in 1800. The essayists write from the vantage point of knowing not only what has happened in the meantime, but also what other writers since then have said about those subjects, those times, and those places. They don’t consider that What We Think is the final word on What They Said, but consider it an invitation to you, the reader, to think about these questions, too.
Funded with grants from the Connecticut Humanities Council and private donations.
Volume I Table of Contents
Volume II Table of Contents
Editors’ Biographies
Essayists’ Biographies
Volume I: What They Said ISBN 1-878508-24-5
493 pp., cloth, 8.5 x 11, illus., $31.95
Volume II: What We Think ISBN 1-878508-25-3
338 pp., cloth, 8.5 x 11, illus., $31.95