Minutes of the 1464th Meeting of the Connecticut Academy of Arts and Sciences (CAAS)
February 13, 2018
The Whitney Center in Hamden, Connecticut 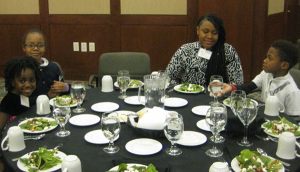 Following the wine reception for the guest speakers, CAAS members and guests stood for the singing of “Lift Every Voice and Sing” in honor of Black History Month.
The President suggested that members who want free copies of the Academy’s seminal publications on the “Voices of the New Republic” reporting on slavery in Connecticut sign up with Sandra Rux from the Publishing Arm of CAAS.
Members introduced visiting guests including children of members whose meals were sponsored by a monetary gift to the President of CAAS.
The President introduced Douglas Nygren who introduced the guest speaker with the following statement. “When I approached Gregory last April about our doing a presentation on the Witness Stone Project and slavery in Guilford, he booked us for February because it is Black History Month.  That sounded appropriate. I didn’t know, however, how appropriate the talk would be. Charlottesville had not occurred, and the project we had imagined was just an idea. The plan was to honor those enslaved in Guilford with memory stones that would be placed in the sidewalk. They would bear the enslaved person’s name and vital data. We hoped to have a school component, but didn’t know whether that would be possible and we didn’t know how the town would receive our project. We have been surprised and grateful at how receptive the town has been.
First the Board of Selectmen okay’ed our putting memory stones for the enslaved. Then the School System approved a month-long unit on slavery for the 8th graders. That period of study culminated on 2 November last year with an installation ceremony on the green and the placing of three Witness Stones as they have come to be known–one in front of the Town Hall, a second in front of the Guilford Savings Bank and the third before the Highland House Museum. Word of what we are doing is spreading.  In December, a researcher from the Massachusetts Historical Society drove to Guilford to research our project and presented a paper about it to the Society just last weekend. This morning Connecticut Public Radio interviewed our speaker today, Dennis Culliton, about both the educational and the public sides of our project. 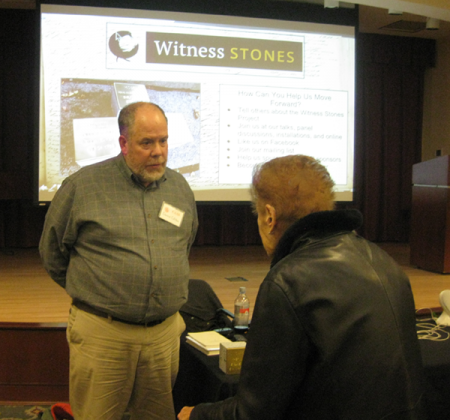 The need for a discussion about slavery in America is pressing. A few weeks ago, the Southern Poverty Law Center’s Teaching Tolerance project  issued a report stating “It’s clear that the United States is still struggling with how to talk about the history of slavery and its aftermath” It concludes, “The front lines of this struggle are in schools, as teachers do the hard work of explaining this country’s history and helping students to understand how the present relates to the past.”  If the schools were to receive a grade for how they are doing this, it would not be a good one. The Center states, as reported by the Atlantic magazine, that in our schools “…slavery is mistaught, mischaracterized, sanitized, and sentimentalized–leaving students poorly educated, and contemporary issues of race and racism misunderstood.”

The Atlantic goes on to cite a study conducted by the Center to assess what students are taught and know from their classwork. Some 1,000 seniors were assessed online. The Center’s study found among other things that only 8% of 1,000 high school seniors queried knew that slavery was the cause of the Civil War. The Center found, Atlantic reported, that “Slavery is taught without context prioritizing ‘feel good’ stories over harsh realities; slavery is taught as an exclusively southern institution, masking the complicity of northern institutions and citizens in America’s slave-based economy; slavery is rarely connected to white supremacy—the ideology that justified its perpetuation; and slavery is rarely connected to the present…and to the persistence of structural racism.”  To remedy this, the Center recommends schools use primary sources and original historical materials to improve instruction.  I am happy that our speaker this evening, Dennis Culliton, is doing just that in Guilford in both his own research and in what he teaches in the classroom.
In his own research, he has used probate and property records, emancipations, bills of sale, wills, census reports and other archival materials to discover a history and record of enslaved people that has gone unrecorded, unnoticed, and neglected, if you will, a town secret. That secret is not particular to Guilford. It is in nearly every town of New England where people were enslaved.  Dennis has taught his students to use primary sources in their study of slavery, and he has had them write papers about people who were enslaved in Guilford. Please join me in welcoming Dennis Culliton.” 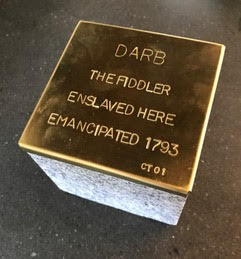 CAAS member Douglas Nygren introduced the origins of the Witness Stones Project and how it began and was inspired by the Stolpersteine Project in Germany.  He was familiar with the work of Guilford resident Dennis Culliton on local slavery and how important it was to remember the enslaved and find a way to restore their history.
Dennis Culliton began his talk sharing his research on Guilford and Madison, Connecticut slavery, the origins with the enslavement of the Pequot Indians and evolving with the inclusion of the victims of the Transatlantic slave trade.  He spoke of the close relationship between Connecticut and the West Indies where our state provided much of the food, lumber, shoes and other items needed to keep the Sugar plantations viable with slave labor.
The talk continued by looking at patterns of enslavement and freedom in these communities during the late colonial and early American eras using census data.  The use of primary documents such as probate records, property records, church records, vital records, and other materials allowed Culliton to begin to paint the story of local slavery that has remained hidden over the past two centuries.
Then Culliton spoke about the Witness Stones project and how Nygren’s idea of memorializing slavery took hold in his mind and soon came out as an educational activity.  The project was developed to inspire students to create meaning from the various primary documents listed above, to restore the history, and honor the humanity of enslaved individuals who contributed to the building of our communities.
After garnering community support and raising funds, the Witness Stones Project was implemented in Guilford 8th grade classrooms in October 2017.  Students first learned about Southern New England slavery through the themes of:
• Dehumanization
• Treatment and Enslaved as Property
• Paternalism
• Economics of Slavery
• Agency and Resistance
The students took that understanding and applied their research to create brief biographies of three individuals: Moses, Phillis, and Candace.
The project culminated this past November 2nd with an installation ceremony on the Guilford Green where over five hundred citizens heard music, speeches by local dignitaries, a keynote address, and the presentation of biographical sketches of the locally enslaved by the students.  On that day, Moses, Phillis, and Candace were remembered by were they lived, how they contributed to their community, and what agency they exhibited while enslaved.
Culliton and Nygren were met with warm applause and answered numerous questions from the attentive audience.
Minutes and Photos by Gregory Tignor and Monica Aspianto