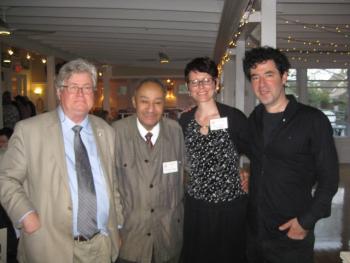 Gregory Tignor, President of CAAS, convened the meeting at 5:30. He introduced Monica Aspianto who is a Minister in addition to being CAAS Recording Secretary.  She gave a minute in tribute to the recently deceased Fred C. Robinson, a Past President of CAAS.  He then turned the meeting over to Vice President David Pettigrew who introduced Professor Stanley.
Professor Pettigrew thanked the Officers of CAAS for their work during the past academic year.
He then spoke of Stanley as an endowed professor at Yale, a PhD in philosophy from MIT.  Stanley had been a distinguished professor at several universities before coming to Yale.  David met Jason years ago when they were both at Stony Brook.  He had great expectations then for Jason and, indeed, Stanley has excelled in linguistics and philosophy.  Stanley has published four books, each much heralded.  His most recent is “How Propaganda Works.” This book has already won the 2016 PROSE award for the subject of Philosophy.
Professor Stanley began his talk with Mass Incarceration as his starting point.  500% increase in Stanley’s lifetime.  The racial figures are startling.  Descendants of slaves are the prime targets representing 36 percent of the prison populations. This is of great personal interest to him because his wife and children are Black.  The Prison Policy Initiative, of which he is a board member, receives all royalties from sales of his latest book.
Jason’s activism concerning mass incarceration can be seen as nothing less than following in the footsteps of his paternal grandmother, Ilse Stanley, who between 1936 and 1938 saved over four hundred Jewish prisoners from Sachenhausen concentration camp and other circumstances before fleeing to the U.S. with her son Manfred in 1939. Jason Stanley quoted from his father’s book: Manfred Stanley’s The Technological Conscience: Survival and Dignity in an Age of Expertise.  Jason’s father was a sociology professor at Syracuse University. 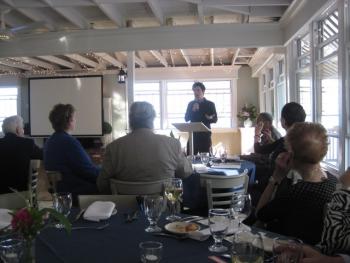 According to Jason Stanley, in European politics, there is usually more than one target.  In America, it’s usually only one: race.  Stanley made reference to Lee Atwater and his work for Bush 1.  At that time, candidates couldn’t use the n-word in public discourse, so they used other topics to refer to race, mostly economic topics.  From then on, there developed a prevalent use of abstract concepts in US elections.  For example, in 1998 elections, the Willie Horton ad emerged.  Never mentioned that it was about race.  Let the viewer decide.  However, in late October, Jessie Jackson said it was a racist ad. The New York Times among others condemned Jackson for his accusation.  In Stanley’s view, this marked the end of Jackson’s political career.
Racial euphemisms became the norm of topics in elections.  Politicians couldn’t use the n-word, so they talked about economic programs that white people associated with Black people.  No use of the n-word.  The Willie Horton ad pushed Bush 1 ahead in polls.  Later, people apparently realized that it really was a racist ad.  The election contest became closer but Bush 1 prevailed perhaps with help from the Willie Horton ad.  On his deathbed, Atwater wanted to apologize for that ad.
Mass incarceration started in the late 1970’s although crime rates had dropped.  But, American Blacks were characterized as lazy and violent.  The argument was incoherent.  But Dole and Clinton tripped over each over in taking on the “Black Problem.”
In the 1990s, Trump called for youths to be subjected to the death penalty for the brutal Central Park Jogger killing of which they were later found to be innocent.  Trump posted a full-page add in the New York Times and three other New York papers urging their execution.  He didn’t need to use the n-word.  He used other harsh language.
American streets were predicted to overflow with blood by one Bush advocate.  Racism had to be camouflaged.  Dialogue couldn’t be about race.  Had to be welfare, something to connect with race although many more whites than Blacks were on welfare.  But, the public said no to welfare because welfare was associated with Blacks.  Civil rights did this; politicians could not use race so they used symbols for race.
In the current political race, one candidate is not being indirect.  Problem is now racially targeted.  But, Trump is not doing Lee Atwater, or Bill Clinton talking on welfare queens.  Trump is blowing all that off.  Why is it working?  Times change.
Consider the new face of heroin.  In the early 70s, this drug was associated with Blacks.  Nixon associated heroin use with Blacks.  It was all about Black crime that had to be prosecuted. Today, heroin use is a white problem.  The new face means treatment, drug court, not incarceration, as it was with Blacks in prior years.  The race of the people involved has become important in the legal outcome. 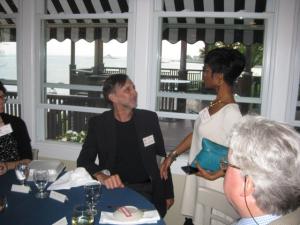 We think of ourselves as indirectly talking about race in the recent past.  However, Trump is now just putting in on the line.  Remember he wanted the Central Park kids executed.  Later, they were found to be innocent.  Trump has a record of using harsh language.  This has been seen with other tyrants around the world.  Think about Trump’s rhetorical strategy.
American politicians had a superficial veneer of politeness.  Trump is tearing that down.  Indirect ways versus direct ways of damaging people.
“The Souls of Black Folks” by Dubois is at the heart of equal respect for everyone.  Under Warren, it was equal respect.  After the Willie Horton ad, people caught on.  If you’re going to target a group, you’ve got to be careful.  Not Trump.  He is being explicitly unreasonable.  What is that doing for him and why is it being successful?
Plato says we can’t have democracy because a demagogue will come along and people will have tyranny.  We must have a state based on equal respect in order to have democracy.
Why is Trump targeting civil respect?  What is his strategy?  Trump is using fascism, probably, never read “Mein Kamp.”  It lies in fascism.  Why did Hitler say there are no subways in Russia when he knew there were subways in Russia?  Fascism is about the personal power of the leader.  Trump is expressing personal power.  His goal is to invent reality.  Trump is the arbiter of reality.  No, it ‘s not about lying.  It’s about putting his power over everything.  This is fascism as a political strategy.  Trump is no genius; this tactic works only if things are bad in country.  America’s problem is a lack of equality.  Something is broken.
Conclude on hopeful note.  Trump is a warning sign to other politicians.  System is not working for some people.  Trump is a wakeup call.  Left-right distinction is not working. 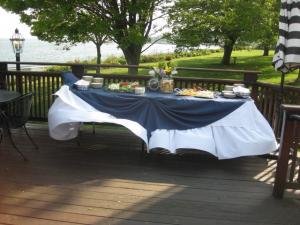 Question:
How come Trump works and Sanders didn’t work?
Answer:
Fascism always beats socialism.  Clinton is playing policy wonk.  Sanders paints broad rhetorical strokes to appeal to young people.  Sanders was wrong on gun control, turned off Blacks.  Media is against both Trump and Sanders.
Question:
To what degree is our problem ignorance?  Schools are going down.  We’re going to be in severe trouble.
Answer:
At the core of democracy, education is important.  Cause of our troubles comes from educated people.  Not that people are ignorant.  Educated people lead them.  Well-educated experts have gotten us in a lot of trouble.  They have started wars repeatedly and unnecessarily.  It’s not that people are ignorant.  Blame the highly educated leaders.
Question:
Problem comes from the end of the cold war.  I listened to the 700 Club wanting to rebuild a wall, never saying what wall.  Now we know.
Answer:
Creating a democracy is about unifying.  You unify a people by making a common enemy both within and outside the country.  The left-right binary might make sense.  Does having a common enemy unify people?
Question:
Trump is disqualified because he and Putin are very similar.  Two Slavic words for truth.  Everyday kind of truth and another kind of deeper truth, that is, what is?  The deeper sense is less manipulated.
Answer:
Maybe democracy is an easily manipulated system.  Sometimes, we need tricking people and manipulating in order to do the right thing.
Minutes by Monica Aspianto