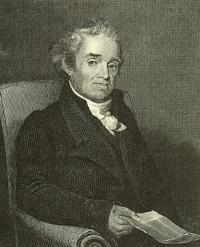 When the President asked me to say something about an early member of the Academy, I wondered whom I should choose.

As you may know, the Academy has been publishing member’s “transactions”, and also “memoirs” (organized in “volumes”). The very first memoir on the list is Volume 1, Article 1 (1810) by Noah Webster: “A Dissertation on the Supposed Change in the Temperature of Winter”, which is a topic people are still discussing over two hundred years later.  So I chose Noah Webster.

He was born in 1758 on October 16, so today we are celebrating his 255th birthday.  He went to Yale and graduated in the great class of 1778.  That same year Ezra Stiles became President of Yale.  President Stiles greatly favored starting Academies for discussion of topics of interest and importance in this new country as was common in Europe, like England’s Royal Societies.

There was some tension between Yale and the government, and it was difficult to start an officially recognized Academy, so people began to meet informally for discussions. Finally, in 1799, a Constitution was passed for the Connecticut Academy of Arts and Sciences.  Webster had a great deal to do with the drafting of this constitution and he was a signatory - and so became one of our founding fathers. He also became an energetic secretary to the Academy.

When he graduated from Yale, Webster wanted to continue his studies and become a lawyer, but his father could not pay for it. This was a big disappointment.  For three days he locked himself in his room to decide what to do with his life.  He concluded that what the country most needed was education, so he decided to become a schoolteacher.

He began to visit and teach at one-room schoolhouses, where he was horrified by the lack of facilities and especially books, many of which were older books from England.

And so Noah began publishing American spellers and dictionaries.

He gradually changed from English to American spelling.

His “Blue Backed Speller” lasted decades, well into the next century, and over time sold some sixty million copies.  He was excellent at promoting his own books, and strong copyright laws.

Webster became known as the Schoolmaster of America.

He was happily married - 6 daughters and one son - and believed in education for women. While the family was living in Massachusetts, he helped found Amherst College partially in order to give his daughters a good education.

Webster was very outspoken and argumentative, not easy to get along with. An early abolitionist he was extremely outspoken against slavery.  Possibly that was why, although he was very active in drafting the American Constitution, he was not sent to officially represent Connecticut. So he is not a founding father of the United States, rather a founding uncle.

Webster was also active in the early days of the Academy. Not only was he secretary, and also wrote assorted memoirs and collected statistical information on agriculture, economy, etc, but he contributed much needed funds from sale of his books.

Noah Webster strongly believed we should be bound together by a single common American language, a struggle still being carried on today by a group called US English, who are fighting to make English our single official language.

He published his first dictionary in 1806, and then began to work on a fully comprehensive dictionary. He learned 26 languages including the etymology of the words, and in 1828 he published his famous “American Dictionary of the English Language” with seventy thousand entries.

In 1840, the second edition was published in two volumes. On May 28, 1843, a few days after he had completed revising an appendix to the second edition, and with much of his efforts with the dictionary still unrecognized, Noah Webster died.

But he is not forgotten.

On the web page describing events last weekend for the inauguration of the new President of Yale, (President Peter Salovey), we are told that the Yale Precision Marching Band was to perform, and I quote: “The Yale Precision Marching Band traces its history from 1776, when a Yale contingent of fifers and drummers led by Noah Webster accompanied General George Washington to Cambridge, Massachusetts.  (They found it “not to our liking” and returned within the week).”