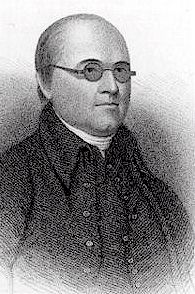 It’s an honor to follow Liz Wolf’s superb inaugural portrait of Noah Webster at our meeting in November. Tonight I would like to pay tribute to another founding member of our Academy, the Rev. Timothy Dwight, the quintessential exponent of what I call the Evangelical Enlightenment.

Timothy Dwight was born in 1752 in Northampton, Massachusetts, famous in that era as the pulpit of Dwight’s grandfather Jonathan Edwards, the central figure in the First Great Awakening. Other important clerical ancestors include Samuel Stoddard, the inventor of the Half-Way Covenant; Thomas Hooker, founder of the Connecticut Colony; and James Pierpont, founder of Yale, to name just a few.  So you could say that Dwight was a member of the Kennedy family of Connecticut Congregationalism.

Dwight graduated from Yale College in 1769 at age 17. After teaching at the Hopkins Grammar School for two years, he returned to his alma mater as a tutor. He intended to become a lawyer, but experienced a religious conversion in 1774 and devoted his life to the church.  When the Revolutionary War commenced, he enlisted as a chaplain. A little more than a year later he had to resign his commission after learning that his father had died.

I need to say something more about the death of Timothy Dwight the elder, because I think it must have had a meaningful impact on his son. Dwight Sr. was part of a highly unusual attempted Southern migration. A group of Connecticut residents with Loyalist sympathies decided to move to Natchez, Mississippi to found a colony there—something on the model that later transpired in the Western Reserve of Ohio. The result was a catastrophe that rivaled the films of Werner Herzog, with most of the party, including Dwight, perishing of malaria or being swallowed up by Mississippi River whirlpools.  Timothy, the eldest son, became the main support of his mother and twelve siblings. One senses that this episode contributed to a lifelong aversion to the South.

In 1783, Dwight accepted the call to a congregation in Greenfield Hill, now part of Fairfield, which he portrayed in idealized form in a popular pastoral poem by the same name.

At this time he also published the first American epic poem, The Conquest of Canaan, a Biblical allegory in 10,000 rhyming couplets, which took him almost a decade to complete.  It was not well received. (Noah Webster was one of its few defenders; Ezra Stiles, in the privacy of his diary, was one of its most scathing critics.)

A less ambitious, but perhaps more valuable literary production was his Travels in New England and New York, based on voyages he made in 1795 and 1815. In part, Dwight had a patriotic motive for this work; like many Americans, he was increasingly annoyed by the plethora of disdainful British travel accounts, and his was intended as a native’s response. In part it was also a New England rejoinder to Jefferson’s Notes on the State of Virginia, on which it was quite obviously based. But Dwight’s main purpose was consciously historical: fully aware of how rapidly the country was developing, he sought to leave a record of what he knew to be a vanishing world.

Dwight’s Travels are well worth reading, as much for their portrait of the man as of the country. Typical is his assessment of the large number of shabby dwellings he observed in Cambridge:

To my eye [they] appeared as if inhabited by men, accustomed to rely on the University for their subsistence: men, whose wives are the chief support of their families by boarding, washing, mending, and other offices of the like nature. The husband, in the mean time, is a kind of gentleman at large; exercising an authoritative control over everything within the purlieus of the house; reading newspapers, and political pamphlets; deciding on the characters, and measures, of an Administration; and dictating the policy of his country. In almost all families of this class, the mother and her daughters lead a life of meritorious diligence, and economy: while the husband is merely a bond of union, and a legal protector of the household. Accordingly he is paid, and supported, not for his services, but for his presence. In every other respect he is…just such another talking trifle as a parrot; and having about as much understanding, and living just about as useful a life; a being, creeping along the limits of animated and unanimated existence; and serving, like an oyster, as a middle link between plants and animals. If such men are not found here [in New Haven], Harvard-College may boast of exclusive privileges.”

You may have picked up a certain feminist tendency in Dwight’s discussion of Cambridge. Discussing the question of whether women had equal abilities with men, he later asserted that there was no basis to judge, “because the different manner of educating the different sexes deprives us of facts. I would not give three groats to have a daughter of mine go to many of the schools in the country. The end kept in view in our institutions for the education of males, is to make them useful: in that of females, to make the admired. Men will pay anything to have their daughters taught to manage their feet in dancing, to daub over a few pictures, &c. to be admired by a few silly young men. I cannot speak on this subject without indignation.”

Born just after the close of the First Great Awakening, Timothy Dwight was one of the principal instigators of the Second.  When he assumed the presidency of Yale in 1795, there were no professing Christians among the student body; Voltaire, Rousseau, and Tom Paine reigned supreme. By the time of his death in 1817, after three revivals, the vast majority had been thoroughly evangelized, and Yale alumni formed the backbone of the nation’s greatest revival ever, in 1831.

At the same time, Dwight continually promoted the advancement of science and scholarship, both at Yale and in the larger society. He was the driving force behind the foundation of our Academy in 1799. We tend to see a divide between science and religion, between Enlightenment and Christianity.  Dwight and his peers emphatically saw no such conflict. Their faith in God was sufficiently grounded that no discoveries in science could shake it. Dwight viewed the study of nature as an exploration of the nature of God.

It is a shame that Dwight did not live fifteen or twenty years longer. The graduate student report on Yale and Slavery that came out a dozen years ago took aim at Dwight as coming from a slaveholding family, and not taking a leadership role in the abolitionist movement.  But he predeceased it. One can sense his influence in the antislavery movement in the uncompromising lives of many abolitionists who had come under his sway while at Yale.

Above all, Dwight was devoted to truth.  “Truth, young gentlemen,” he told the senior class in 1814, “is the same thing in all cases.  It is a perfectly mathematical quantity. So is justice. Falsehood is always the antipode to truth; and the distinction between them is clear and broad…There can be no parties about truth. No man can innocently oppose it….Truth is like justice. “Fiat justicia, ruat cœlum:” or, “Dicatur Veritas, ruat cœlum.” Dwight is quoting the words attributed to Lord Mansfield in the famous Somerset case of 1772, “Let justice be done though the heavens fall,” when he ruled that slavery was in opposition to English law.  Dwight modified this famous statement to read, “Let truth be spoken, though the heavens fall.” When students began to speak the truth about slavery in the mid-1830s, the presidents of Yale, Harvard, Princeton, Brown, and virtually all the other institutions of higher learning silenced them because of the threat they posed to harmonious relations between the North and South. One likes to think that Timothy Dwight, the most influential and respected educational and religious leader of his day, would have stood fast in the face of political pressure. In this regard, I put it to you that our distinguished founder is worthy of our emulation.