With sorrow, we announce the passing of Ernest I. Kohorn, CAAS President Emeritus, FRCOG, MChir. 1928-2021 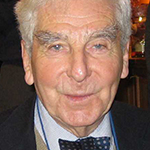 Ernest Kohorn died on November 26, 2021. He was born in Broumov in northeast Bohemia (Czechoslovakia) to Leo and Hilda Kohorn. Leo earned a PhD in philosophy but due to family pressures became the manager of his uncle’s weaving and dying factory. In 1937, Ernest’s father had the foresight to see the dangers of Nazi Germany and went to England to establish a business and home for the family. However, he was unable to obtain visas for his wife or two sons Ernest and John. In the fall of 1938, Hilda and the two boys fled to Prague where they spent a year waiting. Leo finally found a Congregational minister in southwest England to guarantee visas, and after a year of living under Nazi occupation and lining up every day at the police station, Ernest’s mother obtained visas from the Nazis and the family was reunited in England in 1939. The family moved to the village of Belmont in northern England where Ernest’s father was a factory manager.

Ernest recalled walking with his father on the Lancashire moors talking philosophy and history, with his father trying to convince him that philosophy was the ideal occupation. But his father thought one still needed a more lucrative profession to support oneself, and influenced Ernest to choose medicine.

Ernest and his brother went to Bolton School, one of the oldest private boys school established in 1516. From there he went to Downing College, Cambridge University to study medicine. Unusually, but predictably he also took non-medical courses and attended classes by the likes of Bertrand Russell and Susan Stebbins. He always strove to be an expert at several things feeling that it worked for both himself and his patients even though he was advised throughout his life to be an expert in one area. Ironically, he hated to read instructions and preferred the challenge of figuring it out himself.

Ernest did his clinical years at University College Hospital where he described being taught by superb teachers to be a humane physician. He chose to be an obstetrician and gynecologist as for him these fields embraced the whole of internal medicine and surgery allowing one also to bring babies into the world.

Ernest first saw Margot coming down the stairs on the arm of a tall, blonde, good looking young man at a party at the London Jewish Graduates Society. To his relief, he discovered that the young man was her brother. They married in 1953, and continued an intense and emotional love affair that lasted into their 90s, noticeable by all who met them. They had their first child, Ruthy, in 1954.

After he qualified in Medicine he was drafted into the British army. One rotation took him to Brighton where he visited an exhibit about the death of Princess Charlotte in childbirth, and this became a life-long interest. In retirement, Ernest wrote and gave many talks about the medical history of Princess Charlotte.

In 1954 he was posted to the Suez Canal and after 6 weeks of bureaucratic mix-up was sent to Benghazi, Libya, and in 1955 Margot and 18 month old Ruthy were allowed to join him. This was where Ernest met Americans for the first time, and he was the only doctor for both American and British families in the area.

The family returned to London in 1956 and his son, Bruce, was born in 1957. In the family’s first 11 years, Ernest worked incessantly as a dedicated physician and was home little. Margot also worked as a clinical psychologist during this time. But on holidays they would travel Europe in their prized convertible Hillman, camping and walking. Many a mountain top would see Ernest sunning his whole physic, and feeding croissant and blueberry pies to his children. The family spent a year in the U.S. while Ernest was on sabbatical at Yale where his mentor Peter Nixon and Lee Buxton supported Ernest in exploring Ultrasound. Ernest and Stuart Campbell subsequently carried out the first early-pregnancy ultrasound investigations in England. He also studied for and earned his Master of Surgery (MChir) from Cambridge University, a degree he was most proud of (and ended up eventually on his license plate). Yale invited him back as a faculty member and in 1968 the family immigrated to the U.S. It was then that Ernest brought Ultrasound to Yale, and extended his expertise and became a gynecological oncologist and surgeon. Since he was always wanting to be an expert in more than one thing he collaborated with Ed McGuire at Yale, who taught Ernest urodynamics while Ernest taught him gynecological surgery, and both became pioneers in the field of urogynecology.

Ernest spent in all 53 years as a professor at Yale University School of Medicine and became a world renown expert in trophoblast, gynecological cancer, and urogynocology. Ernest was also very active as president and/or treasurer of many international and national medical societies, president of the board of the Connecticut Academy of Arts and Sciences, a fellow at Jonathan Edwards College, a member of the Beaumont Medical Club at Yale, and many other groups. He was always willing to participate and lend his opinion. He remained active in these societies, and publishing in journals well into his 80s.

Ernest had an enormous impact on many people, patients, colleagues, and friends alike, and will be remembered for his generosity with his time and attention, his gifts, his very high standards and drive, his loyalty, and importantly the twinkle in his eye and the love of his family.

He is survived by his two children, Ruthy Kohorn Rosenberg of Seattle, WA and Bruce Kohorn of Brunswick, ME, four grandchildren, two great-grandchildren and his brother John Kohorn’s three daughters. His beloved wife of 67 years, Margot Lytton Kohorn, died in October 2020.